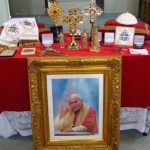 About the Relics
On display for veneration will be the sacred (first class) relics of St. John Paul II, including his blood, hair, and personal rosary. The longest reigning pope in modern history, St. John Paul II was the 264th Pope of the Roman Catholic Church from 1978 to 2005. He died at the age of 84 on April 2, 2005, the Vigil of Divine Mercy Sunday.

Relics are the “remains of those recognized as saints” (CCC). “In addition to the liturgy, Christian life is nourished by various forms of popular piety, rooted in different cultures. While carefully clarifying them in the light of faith, the Church fosters the forms of popular piety that express an evangelical instinct and a human wisdom and that enrich Christian life” (CCC no. 1679).

Our Speaker
Dr. William A. Thomas is a Roman Catholic Theologian, Professor of Mariology at Newman College Ireland, and Director of the Pope St. John Paul II Institute of Marian Studies. Dr. Thomas studied metaphysics and philosophy in the United States before receiving his Doctorate in Sacred Theology (S.T.D.) from the University of St. Thomas Aquinas (Angelicum) in Rome. He served as English Secretary to Bishop Van Lierde, OSA, the Vicar General of His Holiness Pope Saint John Paul II, in the Apostolic Palace. He is a custodian of the Sacred Relics of St. John Paul II, which accompany him.

Event Sponsors
Shrine of Our Lady of Guadalupe & The Marian Institute

REGISTER ONLINE
Registration is not required. However, we would like to know if you will be joining us. Please let us know by completing the following form:

About the Author: Cristina Serrano