Reflections on the Coronavirus

Last week Cardinal Blase Cupich, Archbishop of Chicago, ordered the postponing of all public masses in the Archdiocese of Chicago. Subsequently, he also has ordered the closing of all Church buildings and property to the public and parish staff. Lastly, the Cardinal encouraged all the priests to celebrate “private Masses” and do whatever we can to “accompany” our parishioners in this time of crisis. Some of our brother priests around the Archdiocese have been rather creative in their mandate to support their parishioners. Some have set up chat rooms, FaceTime Conferences, live-streamed their private Masses, etc.

There are many dimensions of how this crisis has forced us to look at the importance of our faith. Sadly, there are more than a few bloggers and catholic pundits practically declaring that this is a purposeful and intentional act of God punishing humanity for its sinful ways. Others are trying to be overly optimistic by saying this is a blessing for us in terms that it can help us come closer as a family. That all may be true, but when you are hurting with Coronavirus, it’s hard to say that “this is a good thing for you.” Understanding the mystery of that this may mean has not yet been revealed since we are still going through it. However, despite the pain, there are hopeful signs of God’s providence that we can hang on to.

This year, I celebrate 25 years of priesthood, and I have never had “postpone” access to the Eucharist or any of the Sacraments. Historically, when the reception of the Sacraments was forbidden, the mandate was ordered by the Pope. That action was called an “Interdict.” This measure was not used to punish Catholics in a diocese of country, but a medicinal one. The intention of exercising this measure was to help Catholics reflect on the value of Christ’s gifts offered through the ministry of the Church. It was a reminder to people that we are not independent beings but radically dependent on the love and mercy of God whose graces can’t be taken for granted. Our proper response to God’s loving-kindness is always gratefulness and service to God’s divine will.

We are not under interdict, but the removal of the access to the sacraments has been made. The effect, I think, is the same. Catholics are called to reflect on what it means to have the Sacraments in your life. Perhaps, judging by the decline of Mass participation, Sacramental Marriages, Baptisms, and even Funerals, we have abandoned these great gifts from God at a much lower price, convenience. The shock of losing access to the Sacraments has made many ask the question today: are the Sacraments necessary for the salvation of my soul? If so, being a sinner as I am, how will I avoid being justly condemned if access to the mercy of God has been removed or abandoned? If we believe that our salvation does not depend on our reception of the Sacraments, then sleep well since there is nothing to worry about ever! The Catechism of the Catholics Church, the Church Councils throughout history, the early Church Fathers and Mothers, and even the Apostles themselves sites the latter.

The Call to Celebrate “Private Masses”

Since the propagation of the new General Instruction for the Roman Missal (GIRM) in 1972 by St. Pope Paul VI, the celebration of the Eucharist moved from priests saying the Latin Mass facing east (Ad Orientem or Verus Deus) to saying the Mass in the language of the people and facing the congregation (Versus Populo). This orientational shift refocused the emphasis of the Mass from being the strict domain of the priest where he rises to the altar and offers the “Holy Sacrifice” to a “Communal Meal” where the priest serves as a host to the community who has come to hear the Word of God and partake in the “banquet of the Lord.” To clarify, both dimensions of the Eucharist, i.e., Mass as meal and Mass as Sacrifice, have always been present. What is new, I believe, is that these two essential dimensions have been pitted against each other in such a way that liturgical theologians such as Pope Benedict XVI, St. Pope John Paul II, Cardinal Arinze, and Cardinal Sarah, both Cardinals being head of the Congregation for Divine Worship and the Discipline of the Sacraments, have declared the Church never envisioned.

I remember my liturgical training in liturgy back when I was in seminary. The Latin Mass, or “Extraordinary Form” of the Mass, was never taught. We would only hear about it, often in a derogatory way, when referencing the development of the 1972 ordo. It was absolutely discouraged to celebrate “private” masses since the communal nature of the celebration would be absent. Indeed, prior to St. Pope Paul VI Motu Propio, it was understood as the duty for every priest to say Mass every day, even if alone. The heavy emphasis on the Mass being a communal meal deemphasized the need for each priest to celebrate Mass daily.

The call by the bishops to celebrate private Masses is a call to reflection on the nature of the priesthood and the priest’s relationship to the Eucharist and the community he is entrusted to pastorally care for. Why is it necessary to celebrate a private mass when there is no community to share it with? Because the Mass is also the sacrificial offering of Christ and the priest to the Father for the redemption of the world. In a time when the image of the priest has been so badly wounded by so many scandals, this silent meditation by both the community and priesthood may be a much-needed blessing.

As a priest, I often think about the lives of the people I am charged to care for pastorally. I identify myself as a “father” of those who trust me with their spiritual care. There is no doubt that the Coronavirus crisis we are living through has distanced the clergy form the laity. It has forced me to strengthen and develop a deeper relationship with Jesus, who offers himself for me and others. In the celebration of private Masses, the priest is alone with Christ, his Lord. Perhaps this, too, is a blessing and a grace since it may be that Christ wishes to speak directly into the hearts of his priests who may be struggling too much with form and style and lack depth and communion with Christ the Lord. 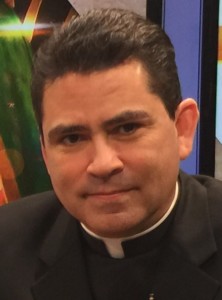 Fr. Esequiel Sanchez was born in Chicago of Mexican Immigrant parents from Durango Mexico. He attended Chicago public schools and graduated from Curie High School. As he was working to complete his Bachelor’s degree in Electronics Engineering from DeVry Institute of Technology, he found his real call when he entered the Catholic Seminary of the Archdiocese of Chicago [...] Read More >