Spiritual Combat Against the Devil

Spiritual Combat Against the Devil

Dear Pilgrims of the Shrine:

The Gospel today describes an episode where a man with a mute demon is healed. Note, that the Gospel refers to the man has having “an unclean spirit.” This man was found in the assembly, in the synagogue at prayer. When Jesus began to preach with authority and power the unclean spirits in the man began to yell out: “What do you want from us Jesus of Nazareth? We know that you are the Holy One of God.” Looking more closely at this text we can see that evil always presents itself as singular or simple, but in reality it always attacks as legion. Only through the authority of the Truth, that is Christ, can one be liberated by the power of the evil one which is our sins.

Today we can see the work of evil in many ways, but the most insidious manifestations are not necessarily in the mortal sins, but in the small venial ones that, over time, become addictions and emotional slavery. Temptations begin by appearing as small things, simple and isolated moments. In reality, behind the scenes it is the work of many elaborating of plan that seeks our enslavement and destruction. Sins of the flesh in its various forms seem to be the most insidious ones lately due to the internet which gives a false sense of privacy or hiding. It is false because God is everywhere and sees everything. God is the Truth that is always with us. Mute is the man with sins, since his sins do not allow him to proclaim the Word of God with authority and power as Jesus does. The mute spirit comes out when confronted with the Truth who is Christ himself.

In the Sacrament of Reconciliation (Confession) we see the same dynamic at play. When a penitent comes to Confession he/she does so because of no longer being able to bear the weight of hiding their sins. In reality, the only thing we do when we confess our sins to the priest (Who is Christ at that moment and absolves sins in the name of Christ) is to tell the truth. Confronting the evil we have done with the truth and authority of Christ frees the person from the bonds of his/her sins. Bringing out into the light what has been hidden, allows that soul to receive the nourishing vitamin of God’s grace as though it were a plant receiving the rays of the sun. In Confession, the power of the Evil One is annulled, leaving the penitent free of sin and bondage that oppressed it. There is no grater liberation and healing than the Sacrament of Reconciliation but we must approach it with courage to confront our sins and speak the truth. 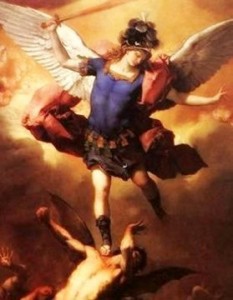