The Shrine of Our Lady of Guadalupe was formally established as a Shrine by the late Francis Cardinal George O.M.I. in 2013 whereupon he named the Very Rev. Marco Mercado to be its first Rector. Fr. Marco assumed the responsibility of developing a plan for the Shrine of Our Lady of Guadalupe. Indeed, since 2010 plans for the development of the Shrine were underway under the leadership of the, then Director of the Cerrito del Tepeyac, Fr. Manuel Martinez. Back then the preliminary work to evaluate the possibility of constructing a large church dedicated to Our Lady of Guadalupe was under way. The mission and goal of this project was to support the faith in the Church of Chicago and beyond through fostering a strong devotion to Our Lady and provide spiritual and sacramental services to all pilgrims who visit the Shrine. Unfortunately, the project remained at the concept level and a true development plan was not able to materialized.

Under the leadership of Fr. Marco Mercado, a renewed effort was taken up to form a plan and begin the development of the Shrine. In 2014, recognizing that the Shrine did not have an enclosed worship space or chapel for nearly 6000 worshipers who attend services each weekend, Fr. Marco anounced his intention and plans to repurpose the north gym of Maryville and convert it to a chapel. He began work on a design for the chapel as a first step towards the development of, one day, building a new Basilica.

Planning for the construction of the new chapel had begun. Fr. Marco contracted architects to help him with the various concepts and designs to repurpose the old gym. In 2015 the general plans for the new chapel were presented to the community in order that the community commit to financially support its completion. These original plans conceived of an entirely new façade and new interior. The projected estimated cost for the project was $7 Million that included the building of a small plaza and parking. The following video is an illustration of what the original plans were.

In October of 2015 there was a change of leadership at the Shrine once again and on March 1, 2016 the Very Rev. Esequiel Sanchez was named as the new Rector by the Archbishop of Chicago (now Cardinal) Blase J. Cupich. Taking the help of the ministry and the vision set out by Fr. Mercado, Fr. Sanchez began immediately to evaluate the viability of the construction project and the development of the Shrine as a whole. Supported by the entire Shrine community and the Finance Council, Fr. Sanchez began to move the project forward by hiring new architects and developing new strategies that will help achieve the communities vision for the Shrine. After months of consultation and evaluation of the previous designs and the projected budget, the Finance Council and Fr. Sanchez agreed that a new design was in order that would be achievable in a shorter period of time.

“St. Joseph, husband of the Most Holy Virgin Mary.”

Because the chapel being built was not to be considered the “main” chapel for the Shrine, since the vision is to someday build a Basilica, the chapel was to be dedicated to “St. Joseph, husband of the Most Holy Virgin Mary.” Devotion to St. Joseph will be the foundation in our hope of obtaining the support of the Church in heaven and the Church on earth in order to someday building the Basilica of Our Lady of the Americas. The new concept for the chapel assumes the original decision of repurposing the gymnasium that Fr. Marco proposed. However, due to budgetary constraints and the focus on developing further plans for the Shrine, a new design was achieved and presented to the community. 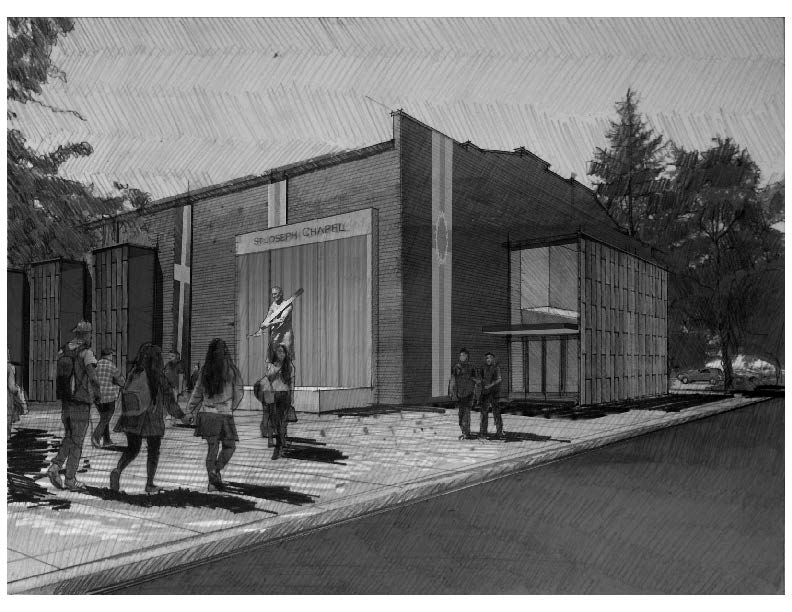 This new design seeks to be more faithful to the original architecture of the building. In this way, the chapel can assume its new function in an organic way. The new accents and architectural designs are better appreciated on in the interior of the building. It utilized elements from the current building while transforming the inner space from a profane space to a sacred worship space. Added to the building are niches that will be used for sacred art and popular devotion and a new sanctuary with handicap access ramps. The altar area will be elevated in order that there may be better participate in the Divine Liturgy. Flanking the main altar will be two special niches of devotion dedicated to Our Lady of Guadalupe and St. Joseph.

Included in this design is the installation of a new air-conditioning system that includes both heated and chilled air in order to better regulate the temperature of this large space. A new lighting scheme will be added in order to have better control over the illumination of the building for the various liturgies celebrated. We will also be adding new bathrooms for both men and women, new sacristies, a balcony and sound system for the music ministry.

The total cost for this new design is estimated at approximately $5 Million: $2 Million less than the previous concept.

We would like to invite everyone to participate in making this dream a reality. Please consider making a special gift that will help us honor St. Joseph and through him, Our Lady of Guadalupe.

Make My Pledge
Go to Top