The Liturgy and Piety

The Liturgy and Piety 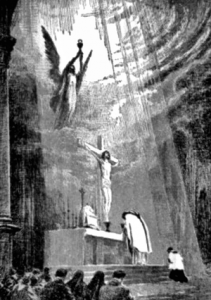 A friend of mine who is the Director of the Institute for Pastoral Leadership (Instituto del Liderazgo Pastoral) invited me to give a course to aspirants to the permanent diaconate and lay leaders on the subject of the liturgy. I informed her that I was not a liturgist in the since I do not have degrees on the subject, but that I would be happy to share my experience as a leader of worship. Needless to say that I have been brushing up on the basic concepts and documents to share with my new students as well as open the forum for discussion about the issue of worship.

Many have commented on the decision to celebrate Lent with mass “Ad Orientem” (facing liturgical east). For some, this is a nostalgic moment since this was the way many had experience the celebration of the liturgy when they were kids. For the newer generation of Catholics, this is a novelty and an opportunity to connect with the past. Why celebrate mass in this fashion? Most people don’t realize that the Church presupposes that the mass be celebrated in this manner – according to the rubrics of the Roman Rite. There was a special permission given shortly after the Second Vatican Council to have the mass celebrated “Versus Populo” (Toward the people). That exception became the norm in the liturgical life of the Church.
Pope Benedict XVI allowed for the restoration of the old liturgy known as “The Tridentine Rite,” better known as the “Latin

Mass.” The reason for the renewed openness of the Rite was because the Holy Father saw that the new form was implemented far too hastily and whose consequences have left a divided experience for the Church. In order to remedy this, the Holy Father wanted both forms of the Mass live side by side and dialogue with each other. The principle behind such a decision was a basic one. The Pope understood that there is a fundamental relationship between the Lex Orandi and the Lex Credendi (the law of prayer and the law of belief). In short, how we worship impacts what we believe and vis verse. The Holy Father wanted us to experience both forms of the Mass in order that the Catholic faithful might discern the will of God in the Holy Spirit. The main principle to consider for the celebration of the Divine Mysteries is; is this how God wishes to be worshiped?

The Lenten season is a wonderful time to take into account this important question. How do I approach the mystery of the Mass? Do I believe what we are celebrating and are we celebrating what we believe? Jesus demands that we worship God with full, active and conscious participation. The mass is not merely an action done by the priest or the people, but it is a true reliving of the sacrifice of Christ that has saved us.