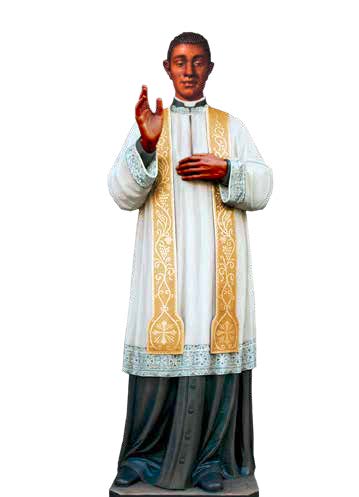 On Sunday, April 7th, at 1:00 p.m. the Shrine of Our Lady of Guadalupe will jubilantly celebrate the arrival of the image of a “Servant of God” and a significant intercessor for the Church in Chicago. I am referring to the welcoming of the image of Fr. Agustus Tolton who will take his place among the panoply of intercessors in our new St. Joseph Chapel.

1854: Augustus is born to Martha Jane and Peter Paul Tolton in Missouri on April 1.

1861: Civil War begins with firing on Fort Sumter in South Carolina on April 14.

1862: Martha Jane escapes with her children to Quincy, Illinois. This same year, Mary Jane Patterson graduates from Oberlin College in Ohio and becomes the first black woman to graduate from an American college.

1863: At the age of 9, Augustus Tolton begins working in a Quincy tobacco factory and his brother Charles dies at age 10. This same year, President Abraham Lincoln’s Emancipation Proclamation legally frees all slaves in the Confederacy.

1865: Augustus Tolton entered St. Boniface School and left a month later because parish and staff were being threatened and harassed by his presence. This same year, the Civil War ends on April 26.

1880: Augustus Tolton departs for Rome on February 15 to enter the seminary at the Collegium Urbanum de Propaganda Fide. He expects to become a missionary priest in Africa. This same year, the Census of 1880 showed the U.S. population at 50 million with a Black population of 6.5 million (13%).

1886: Augustus Tolton was ordained at St. John Lateran Basilica in Rome on April 24 and was told he would return as a missionary to his home country of the United States in Quincy, Illinois. This same year, Fr. Tolton conducted his first Mass at St. Peter’s Basilica in Rome on April 25. He also celebrated his first Mass with Franciscan Sisters in Hoboken, New Jersey on July 7, and he celebrates his first Mass in Quincy at St. Boniface Church on July 18 and becomes pastor of St. Joseph Church. In Chicago this year, the Haymarket Riot occurred on May 4 on Des Plaines Street north of Randolph Street.

1894: The dedication of St. Monica Church occurs on January 14. Click here to read the full story in the Chicago Tribune.

1897: Father Tolton dies at Mercy Hospital in Chicago on July 9. He was 43. The funeral was at St. Monica Church, 36th and Dearborn Street on July 12. A funeral also occurred at St. Peter Church in Quincy on July 13. Articles on the death of Father Tolton in The Chicago Tribune and the Chicago Daily News. (Timeline of Fr. Tolton’s life was taken from the Archdiocese of Chicago’s web site.)

By honoring Fr. Tolton at the Shrine of Our Lady of Guadalupe we are called to remember the relationship between the history of the Americas and the promise of Our Lady to bring all of the “people of this land” all of my love, help and protection, included African Salves and their children. Indeed, the first artist commissioned to paint the first twenty copies of the Tilma of Juan Diego was Juan Correa, son of African slaves. By 1810 the Mexican War of Independence was waged by Criollos, Mestizos, Native Mexicans and Mexicans of Afro-Decent under a banner with the image of Our Lady of Guadalupe and leadership of Fr. Miguel Hidalgo.